20-First is an organisation that brings some research-backed credibility and rigour to the passionate debate about gender diversity at the top of large organisations. Where Cranfield University’s Prof Susan Vinnicombe leads for women on the boards of UK companies, Avivah Wittenberg-Cox tackles the larger task of doing it globally.

20-First has just published its annual survey of how large corporations fare in achieving female representation not at Board level but at the C-Suite level. Wittenberg-Cox believes that this is where the real influence and difference can be made by breaking the male hegemony – and most recent leadership literature indicates that female traits are a significant advantage for successful senior leadership.

The annual survey ranks organisations’ progress in achieving this 21st Century male-female balance amongst executive officers in the following six phases, which make up the Gender Balance Scoreard (a neat play on the Bain & Co ‘Balanced Scorecard’ approach, so beloved by MBA programs globally):

ASLEEP - Some companies haven't even started the journey; we put them in our 'Asleep' category. These companies are still, in 2011, run by an exclusively male team.

TOKEN - Many companies have appointed a 'Token' woman to the team, or sometimes two, but in any case less than 15% of the Executive Team. And in this category, she is in a staff or support function rather than a line or operational role. This is a key distinction for companies interested in creating sustainable and effective role models.

STARTING SMART - Next are the 'Starting Smart' companies. They also only have a single woman, or less than 15%, but she is in a central core or operational role, or is even CEO, and so offers a better role model to get companies started on the journey.

PROGRESSING - Moving right along, are companies that have progressed beyond a single representative of the female sex, and have achieved a male / female balance between 85/15 and 75/24. These companies are beginning to render visible at senior levels the investment they have made in building their talent pipelines over the previous decade.

CRITICAL MASS - These are companies that have achieved a male/female ratio of at least 75/25. This is the level at which the women on the team - and their views - are no longer seen as minority representatives, but as integral parts of the talent and executive pool.

BALANCED - Is for the extremely rare companies that have achieved gender balance, with a minimum 40% of either gender on the Executive Team. This is where the gender journey ends, and where balance at the top begins to reflect the reality of 21st century customers, leadership and talent and gives companies the competitive edge to innovate and deliver.

It will not be a huge surprise that few companies have yet met this balance – but this does not stop it from either being a sad indictment on corporate leadership or a goal worth striving for. Structural difficulties with women’s career paths, not least family pressures and less hunger for the top job over job fulfilment, still exist in achieving it – but as time passes surely more companies will move into the ’balanced’ phase and see the benefits from that. 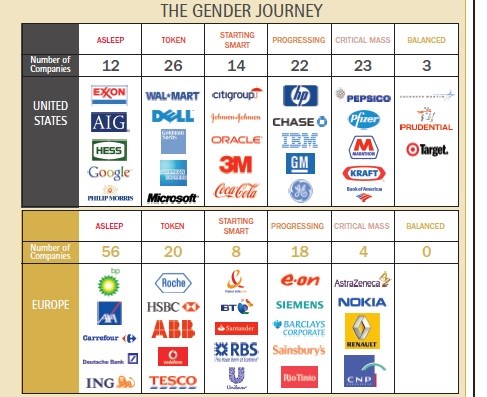 Thinking: brilliantly applied for the decade ahead

Learning from Those Living Through Change